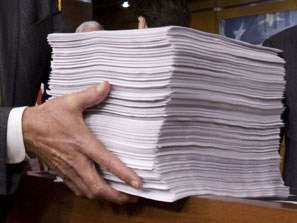 One recent much-discussed political issue (at least until another one replaced it a few hours later) was that some of the Republican members of Congress admitted in interviews that they had not read the American Health Care Act of 2017 before voting to approve it. Democrats mocked this as further evidence of a rushed, irresponsible process. I’m not using this corporate and securities law blog to expound on my political views on the AHCA or anything else. (I do that about once every three months on my personal Facebook page.) However, on the general question of whether legislators should be expected to have read the full text of the bills they’re voting on, I’m with the “that’s a ridiculous waste of time” camp.

As part of my extensive research for this blog post, I looked up the text of the AHCA, scrolled down to a random part of it, landing on this paragraph:

It’s fair to say that this is not (nor is it intended to be) an easy read. The passage consists mostly of cross-references to other parts of the statute. The intent of the drafter is not to explain healthcare policy to a layperson but to (one hopes) precisely state what the law is in the context of other parts of the current bill and perhaps other parts of existing law. If you take a typical member of Congress with no particular healthcare expertise, and force them without any other background to sit down and read the full text of the AHCA any amount of times and at any speed, they would likely not be able to then explain to anyone in simple terms what the bill does. What happens in practice, and several of the interviewed members of Congress said this, is that they have staff members that become expert in particular areas, and they read it and explain it to the representative, answer questions, etc. As long as that happens (and I don’t know if it did for everyone who voted for the AHCA), then the legislators have responsibly discharged their duties.