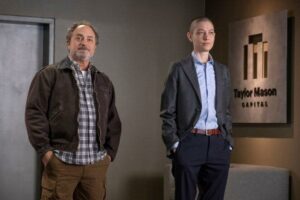 I am very much a member of the target audience of Billions, the Showtime drama about the intersection of law and finance in New York. As a corporate lawyer with the professional background to decipher at least some of the dense jargon, I sometimes have to suspend disbelief at the plot twists, including a U.S. Attorney who doesn’t recuse himself from a criminal investigation of a hedge fund that employs his wife, as well as a coordinated FBI mass arrest of politicians at a funeral service.

However, a development in the current season effectively presents an issue that inevitably faces founders in successful startups. We are introduced to the father of fund manager Taylor Mason. Dad has a promising business idea, and he wants Taylor to finance the business and let him run with it. Taylor seems to genuinely think the business has legs and connects the father with a few venture funds that are also interested and provide term sheets for financing. The father, however, is put off by this development and rejects outside financing. He is concerned about losing control of his enterprise and views Taylor’s actions as demonstrating a lack of faith in his ability. Taylor counters that you need outside help to make the business a real success.

Ceding control is an issue for any startup that seeks to scale up in a significant way. Institutional investors often seek to professionalize the management of their portfolio companies, installing management with relevant experience, even if the founders remain involved to one extent or another. Many founders, of course, think they are the reason for the company’s success to date and can’t conceive that their job could be done better by anyone else. Some founders successfully maintain control despite the growth of their business; Mark Zuckerberg of Facebook comes to mind. (While one can’t deny that this worked out for him, one can imagine a scenario where he brought in early additional help from people with a humanities background, with an understanding of journalism and privacy issues, and the company could have had similar success without the controversy.)

Ultimately, while there is no guarantee that venture funds and other parties who get involved in decision-making will make the right choices for a startup, founders must at least recognize the limitations of their skill sets and be willing to delegate to those with the right experience.