Over my almost 18 years of practicing transactional law, I’ve often been mildly (or sometimes not so mildly) exasperated by common inconsiderate behaviors by opposing counsel on my deals. Of course, our primary job as attorneys is to represent our clients, but unnecessarily agitating other attorneys does not, in the long run, serve our clients’ interests.  The following are some frequently-occurring examples of bad corporate attorney etiquette to avoid:

Sending Uneditable Drafts.  Often I will receive initial drafts of an agreement in PDF or read-only form. In other words, I can’t easily get into the document to provide edits. Of course, I can provide the comments in other ways, but the point is that you’ve made it harder for me to do my job. The signal you’re sending by doing this is the opposite of transparency, and if anything, it predisposes me to think you’re trying to hide something. The time to create PDF versions is when both sides are in agreement and ready to execute the agreement. 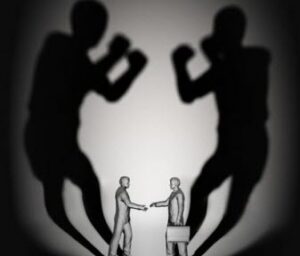 Feigned Outrage over Business Issues.  If I’m drafting an LLC agreement on behalf of a company that is taking on outside investment, the default position will be to reserve most or all of the management rights to the managing member, with little or no involvement by outside investors, particularly when the investors hold a small stake, not in a VC-type institutional investment. In some cases, counsel to the investor will react angrily, as if I tried to sneak something past them.  In reality, this is a business issue, and there’s no one obviously right way to do it. In such a scenario, the right way to handle it is to point it out to your investor client and see if they want to try to negotiate something.  But spluttering about how your client, who’s holding 3% of the company, is lacking in the ability to veto major company decisions isn’t really appropriate.

Inaccurate Blacklining.  If you send your comments to an agreement with a markup showing your changes (which you should), please be sure that the markup actually shows all of the changes you’ve made. As a matter of course, I run my own blackline showing the changes that the attorney made, and fairly often, the blackline sent by the other attorney isn’t accurate. Probably more often than not, this is an inadvertent failure of version control by the attorney, but it inevitably suggests the possibility that the attorney was trying to slip a change past you.

Failure to Explain Comments.  If you’re commenting on my draft, unless the changes are completely self-evident, don’t just send the markup without explaining in a cover note where you’re coming from. At the very least, offer to go through the changes in a subsequent phone call.