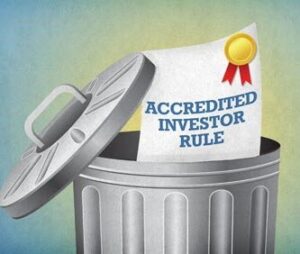 Several of the categories of accredited investor are non-controversial, for example, a bank or an executive officer of the issuer.  However, the categories that apply to most individual investors — based on income or net worth — have come under increasing attack. The numerical thresholds ($200,000 annual income for a single filer or $1,000,000 in net worth not including primary residence) have been in place for years, not indexed for inflation. However, the more important question, in my view, is not what the thresholds should be, but why income and net worth are the sole determinants of accredited investor status for individuals.

This short and readable letter from the SEC’s Advisory Committee on Small and Emerging Companies points out that “[t]he Committee is not aware of any substantial evidence suggesting that the current definition of accredited investor has contributed to the ability of fraudsters to commit fraud or has resulted in greater exposure for potential victims. The connection between fraud and the current accredited investor thresholds seems tenuous at best.” In other words, high net worth individuals are often defrauded (see Madoff, Bernie), and conversely, a low-paid adjunct professor who teaches about money management is excluded.