If you have a small private company with 10 shareholders, the job of issuing share certificates to them, and cancelling and issuing new ones when there are transfers, is a pretty non-time consuming task that can be handled by one of the founders. If you are Microsoft Corporation, where over 30 million shares change hands every day on average, needless to say, a person seated in front of a stock ledger book couldn’t keep up with the flow. Accordingly, for public companies, a back-office infrastructure has developed, with stock transfer agents serving the function of keeping track of record ownership of shares for these companies. 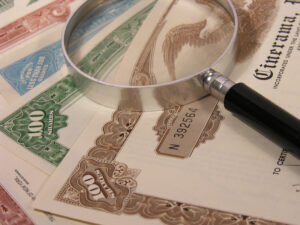 As described in this Q&A from Luis A. Aguilar, one of the Commissioners of the SEC, an important function of transfer agents is to distinguish between restricted shares – ones that were recently sold in an exempt transaction under the Securities Act of 1933 or were issued to company affiliates – and unrestricted, free-trading shares. In my practice, I typically deal with the larger and more established transfer agents, which employ full-time compliance professionals to ensure that restricted shares are policed properly. For example, if a shareholder of a client of mine asks the transfer agent to remove the restrictive legend because the shares have been held over a year and the holder isn’t an affiliate, the compliance department of the transfer agent will want to see an opinion of counsel from my firm, to the effect that the legend can be removed under Rule 144.

Unfortunately, as described by Commissioner Aguilar, some transfer agents are not as scrupulous about adhering to these rules. Under current (non-)regulation, the same individuals can operate a transfer agent, a brokerage firm and a microcap public company. In such a scenario, if those individuals want to initiate a scheme involving the sale of unregistered shares, the transfer agent (being the same people) won’t police the transactions to prevent them from happening. This is just one of many examples cited by Commissioner Aguilar making clear that a more aggressive regulatory approach is needed.