This Slate.com article profiles an experiment undertaken at the electronics retailer Best Buy, where “knowledge workers” (i.e., not the sales associates that deal directly with the public) were managed under a Results-Only Work Environment, or ROWE.  There are details in the article, but essentially the workers were granted complete autonomy on how they did their jobs – whether they worked in the office or from home, whether or not they attended meetings, etc. – and they were judged purely on results, such as an increase of sales, or whatever metric is appropriate for the particular worker. 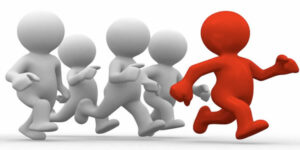 Although there are good and bad ways to implement such a plan, I broadly agree with the proposition that improving employees’ sense of autonomy will maximize performance (as well as happiness).  However, I don’t believe that most of my former large law firm colleagues share that view.  Unless there has been a sea change in attitudes over the four years since I left that world, that particular workplace is likely to be highly resistant to ROWE-like initiatives.

Even though the majority of work that a typical large firm attorney does (even the litigators) can be done anywhere – emails, phone calls and drafting/writing – there is a culture of judging attorneys based on their physical presence at the office at particular times, i.e., an emphasis on face time.  And this has remained the case long after technology has made it possible to work remotely.  An oddity of the New York law firm version of face time is that far more attention is paid to the hour at which an attorney leaves than when he or she arrives, so whether you arrive at 7am or 10am is far less important than whether you leave at 7pm or 10pm.  I recall many interviews at firms in which the interviewer would say things like “Oh, there’s no face time here.  People can leave at 7pm.”  Contrary to the interviewer’s statement, there is very much face time judgment involved at such a firm: if you left the office at 4pm to get home for your kid’s little league game, and then caught up on work at home from 7pm to 10pm, you’re a slacker.  Again, I hope for the sake of those currently working at large firms that there has been some change along with how society has evolved generally, but it wouldn’t surprise me if big law remains a big holdout on these issues.